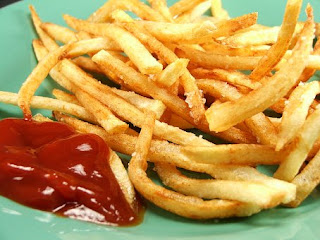 I hate to always be the bearer of bad news but this was something you already knew. Now it is solidified with scientific backing –stay away from the potato wafers and French fries. To fend off the kilos as we age, conventional wisdom says you must exercise more and eat fewer calories. Now according to a study by Harvard researchers, what you eat and drink may also play a role in weight control.

According to lead researcher, Dr. Dariush Mozaffarian, an epidemiologist, all foods are not equal, and just eating in moderation is not enough. The results appear in the latest issue of the New England Journal of Medicine.

The study also stands out because it quantifies how much weight a person is likely to gain or lose over four years based on one additional daily serving of a range of specific foods. Potatoes were the biggest offender. Eating more potatoes correlated with a gain of 0.6 kg with French fries in particular associated with a 1.5 kg gain; sugary drinks, processed meat and red meat were associated with about a one-pound gain. More TV watching caused bigger weight gains and more physical activity were associated with smaller weight gains – no surprise there.

Many times I am asked if it matters what food calories we consume as long as the calories are fewer than we exert in order to lose or control weight. I keep pointing out that the quality of food calories is just as important as the quantity of calories.

The authors of this study say their study points to a different kind of dietary advice for avoiding extra pounds associated with aging. “This suggests that the path to eating fewer calories is not simply to count calories, but to focus on consuming a more healthy diet in general,” says Dr. Mozaffarian.

Eating more fruits and vegetables, nuts, whole grains and yogurt correlated with slight weight loss over four years. So what is the explanation? The researchers cite that perhaps that these fibre-rich foods, although high in calories(nuts, in particular) are satiating, are digested more slowly and deter you from eating other empty calories.

Yogurt is high on the list of good foods to eat for weight control, surprisingly because it does not contain a lot of fibre. The researchers aren’t exactly sure how it helps keep waistlines in check, but think that the bacterial cultures play a beneficial role inside the intestines. Also it is possible that people who eat a lot of yogurt have other healthful habits such as exercise and eating balanced meals.

I am surprised, as are other nutritionists, that pastries, cakes and doughnuts have not played a more significant role in the weight gaining foods category in the study. This may be that people who eat potato chips regularly are basically those who eat too much in general. Also that oil may play a large role in our weight gain, both potato chips and french fries are deep fried.

My take on the potato – I think it has been treated very badly by all chefs and home cooks alike. A boiled potato is full of vitamin c, B-6 and folate and is a choice of athletes for energy for endurance sports. It is when it is mashed, fried and used as a vada for vad-pav or a alu tikki for alu tikki chaat that it gets dangerously unhealthy. Do not ban it from your diet but eat in moderation and in the correct form – roasted with minimal oil or boiled as a healthful snack.

The Anatomy of a Biscuit