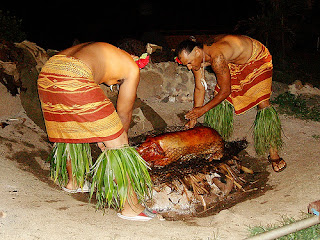 Both my grandmothers were excellent cooks. But at one home the food just always tasted better. The taste of the vegetables, fish, chapattis made at this home are unmatchable to this day. This grandmother cooked all her food on a fire pit. Stacks of bricks were cemented on the kitchen floor making an above ground cooking pit standing at only one foot high. A burning fire would be the cooking source and through a black metal hollow stick that my grandmother would blow air through would control the level of the fire.

Much of rural India still uses this method for cooking. It was hard work for the women of the house; gathering firewood and constantly blowing on the fire to ensure the correct flame and being surrounded by smoke. My grandmother’s family was the beneficiary of this hard work, food prepared with open flames. Perhaps that is why mom could never match up to her mother-in-law, mom will feel better knowing it was the cooking method and not the technique.

The technique known as pit cooking is merely the term for an oven made in the ground, and earth oven. Yet this slow and steady method of cooking makes the end creation win the race to cookery perfection.

Pit cooking is an ancient technique still alive today in many cultures and culinary circles. It is not to be mistaken with grilling which has evolved from pit cooking but is not quite the same thing. Traditional pit cooking is actually cooking with a hole dug in the ground lined with stones and firewood. The fire is ignited and allowed to burn down to glowing coals, heated up similar to preheating the oven. The layer of leaves between the fire and food gives it the smoky flavor but these days mostly charcoal are used. 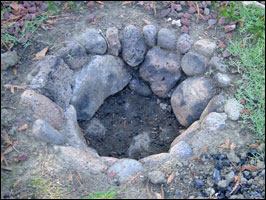 Pachamanca is a Peruvian dish based on baking in an earthen oven known as a huatia and is made by digging a pit in the ground and heated with hot stones. Primarily made of all different meats such as lamb, chicken, mutton, pork, or guinea pig there are also plenty of native vegetables added to the dish such as sweet potato, lima beans, cassava, corn, and tamales. All this layered with potatoes on the botton, meat in the middle and vegetables on top is cooked over hot stones and after 2-3 hours a succulent all in one dish emerges.

Pachamanca is important to Peruvians because this heirloom dish was made to celebrate the harvest to worship the earth by the ancient Inca Empire. It has evolved over time and differs from region to region but remains a popular dish throughout the Andes.

Hawaiians are well known for their luaus where they cook in an oven in the ground known as an imu. The dish of note kalua, a pig roasted whole, is always on the menu at a traditional luau. The imu is essentially an underground steam cooker used to cook whole pigs, bananas, sweet potatoes, chicken, and fish.

Building an imu was a long and laborious process so when it was done it was to cook for occasions where there were a large group of people, festivals, or religious ceremonies. And even now modern day imus are the center of the Hawaiian luau party. However, local health departments do not allow hotels to serve food cooked in the ground so most hotels use the imu to cook a pig for decoration and serve pork that has been cooked in a traditional oven. Real imu cooking is mostly done for traditional Hawaiian occasions.

At home in India pit cooking has been part of the culinary heritage for centuries. Mouth watering dum Phukt lamb, dum phukt biriyani, raan-e-dum pukht(mutton) and kakori kebabs(minced mutton) are cooked slowly in an earth oven. Dum Phukt, which literally means “containing the steam” began with the meat eaters in Persia and brought to Lucknow. A pot was filled with meat and spices and the lid was sealed using chapatti dough. The pot was placed in the dug hole with hot charcoal and left to simmer for hours and finally when the lid was open the aroma would enthrall the diners’ senses.

The tandoor, brought to India from Persia via the Afghanis, was also was originally an oven in the ground. There is also evidence that tandoor was native to India as far back as 3000 BC as there have been small mud plastered ovens similar to tandoor found in Harappa and Mohenjodero civilizations. 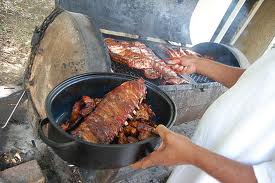 It was made transportable by Jehangir who instructed his cooks to build and design a tandoor which could be easily taken along on his travels. Jehangir can also be thanked for the creation of tandoori chicken. The combination of the yogurt based marinade, the charcoal, and the high heat gives tandoori food a unique quality flavor of its own.

Let’s not forget the good old USA which has made barbecue known worldwide. A traditional barbecue pit was also a hole in the ground where food was cooked slowly over wood or charcoal at a low temperature. Brisket was the favourite among the cowboys as well as pork, beef, venison and goat.

One day someone put a grill over the pit and began to cook over an open fire. This has evolves to grilling or the modern day barbeque. Actual under the ground cooking is a rarity and there is a range of ready barbeque grills available where no digging is required. Just light up and cook. The secret to a good barbeque is the sauce and this varies depending on the area of the US and meats used, Kansas City sweet sauce, Louisiana hot sauce, Alabama white sauce, and Texas mop- sauce and Memphis dry rub are the favourites. Some are tangy, some spicy and some sweet. Barbeque cooking competitions judged on the best sauces and marinades take place every summer with all the regions fiercely competing.

Pit cooking encompasses both steaming, slow cooking and roasting. For example the chula (above ground pit used in rural India) and other open fire pits are for slow cooking with a pan, the Hawaiin imu for steaming and the barbeque for roasting.

First Tandoor
Jawaral Nehru made tandoori food part of the official banquets for foreign head of state
Moti Mahal in Delhi was the first restaurant in India to install a tandoor. It still exists today with burgeoning franchises in many parts of the country.

Oven of Thieves
In the mountains of Crete thieves(kleftes) would steal lambs and cook them in a pit later named as kleftiko. They would prepare a deep hot pit before their theft and begin to cook the animal almost immediately. The owners could not locate their animals because there was no smoke from the cooking. Twenty four hours later, long after the search for the thieves was over, the pit was opened and the meat tender and ready. Today the Greek popular dish known as kleftiko lamb is made in a traditional oven.

Barbie…not the doll
Barbie is the name for a barbeque in Australia. This too originated from Aboriginal pit cooking which dates back several thousand years.

Step 1
1. Mix mutton curds and salt thoroughly and keep aside
2. Blend next 11 ingredients together in mixer till it forms a fine paste.
Mix paste thoroughly with the marinated mutton.
3. Place in refrigerator for 6-8 hours
4. Heat oil thoroughly in a thick-bottomed pan.
Add marinated mutton and cook on a slow flame for 10 minutes or till the oil leaves the masala.
5. Add the water.
Cover the pan with a lid of exactly the same size.
6. Seal with dough and cook for 45 minutes on a slow flame or till steam comes out of cracks in the chappati dough.
Cut off the dough and open the lid to the pan.

Directions
1. In saucepan, add water, onions, celery, salt, chili powder, vinegar, ketchup, Worcestershire Sauce, and brown sugar and mustard.
2. Simmer, uncovered, for 10 minutes.
3. Can be used as a marinade or for brushing meat during last 10 minutes of cooking.

2. Gently rub the paneer with paste and leave for at least one hour.

3. Put this paneer in a greased dish and grill/tandoor for about 10 minutes till it is dry and crisp.

4. Heat oil in a pan. Cook onion and capsicum with some prepared tandoori paste and serve with paneer.

5. Sprinkle some chat masala and lime juice on top.

Add 1 cube of cheese, and distribute the vegetables evenly among the eight packets. Place each piece of meat on a large square of thick aluminum foil. Add a few drops of lemon juice, salt, pepper, oregano, and mint. Fold the foil in double fold at top and seal like a package. Arrange packages close together in a baking pan and bake 1 1/2 to 2 hours. Serve each foil package, sealed, on dinner plate and let each guest open his own.

The Main Reason for Obesity