Food Culture
February 2, 2010June 3, 2015 Rita 1042 Views 0 Comment Food Culture
Rice, rice and more rice is what is served in South India. As I drive past Belgaum I know that chapattis and bakris will not be a regular on the menu.
Not that I mind rice, I grew up eating only rice. I never knew really knew what a chapatti was but I used to love the buttery naans that was a favorite at our occasional visit to an Indian restaurant. Puris were common at home, but that was a time when the word cholesterol was not in our vocabulary.
I had recently gone to Hubli which is located in North Karnataka for the munjas of my nephews. When I visit my relatives in Hubli I gorge on all things Konkani…fish, different dosas, all types of curries, and there is always a dish that I have not had for years that brings back so many childhood memories of my visits to India. As always in our Konkani affairs food plays an important part in the hospitality. The host takes pride in the quality of the food. 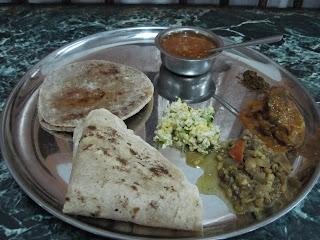 The “ghar puja” where the Gods are called upon to bless the occasion was the first function and all the food for 60 family members was made at home by an expert cook who is hired for such occasions. My son was hungry and enjoyed all the Konkani curries and pickles served on banana leaves but after eating the first serving of rice he asked “is there only rice, when is the poli (chapatti) coming?” Embarrassed by his question I told him that in the South they only eat rice and to take another helping of rice. He did take another two helpings but said he did make it a point to tell me that eating so much rice at one time is not easy.

In the evening there was a family party with music and dancing. The hosts announced that the food served will be traditional Dharwad/Hubli cuisine. I was surprised to find that in this region the food is very similar to Maharashtrian Brahmin food. Jowar bakris are a staple. The plate consists of a vegetable, a pulse, a cocimbir(salad) and various chutneys. This is followed by a little rice, sambhar and curds. The taste however is very different, there is no jaggery or goda masala (Maharastrian) garam masala used in many Maharashtrian dishes. 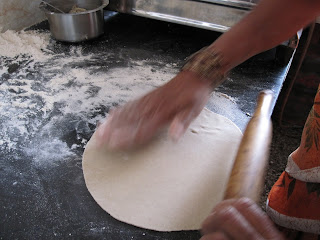 Lingayats are the native people of the region and the jowar roti is a must in all their meals. The roti is both rolled and hand pressed and then cooked on both the direct fire and tawa. It is soft and more like a mix of bakri and chapatti. It tastes best, like most things, eaten hot. Those that can afford ghee to the waistline, please add on.

The brinjal curry was tasty and spicy as was the salad. The chutneys and sambhar were worthy of second helpings. The only dish that I did not like was the matki pulse dish which I thought was tasteless and even required salt. The peanut sweet roti was excellent and like eating a soft peanut ladoo. Papad or something crunchy is also a must at mealtimes.

For those who are unable to make the jowar rotis at home, they are available for sale at a few general stores. Some enterprising ladies also make the rotis at home and deliver. It was an experience and education to learn this Lingayat cuisine of North Karnataka. Now I know that the South is not only about rice!